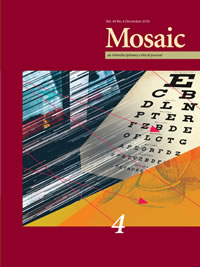 View the issue introduction or see the issue summary and contents below.

Mosaic takes as its mandate the publication of interdisciplinary essays that open new research avenues. Noteworthy in this respect, the present issue brings the journal’s 2016 publication year to a fitting close. I am taken, for example, with the immediate relevance of “critical refugee studies,” a theme that is broached by this issue’s opening essay. While Alaina Kaus takes as the context for this opening essay the Vietnam War and Vietnamese diaspora in American remembrance, her study might well serve as an incentive for the interdisciplinary analysis of other wars, perhaps especially recent ones, that have been cast in American rhetoric as conflicts between good and evil. For but one other example, consider the essay by Joseph DeFalco Lamperez, another graduate student. In my reading, this is a remarkable and sophisticated exercise in interdisciplinarity, and one that no doubt invites more studies to come.