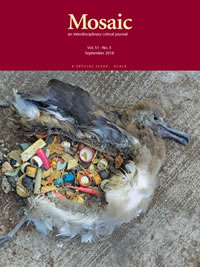 View the issue introduction or see the issue summary and contents below.

Within the biological-ecological sciences from which the term Anthropocene emerged, “scale” has a longer history and broader usage than it does within the now-proliferating philosophical, critical, theoretical, and ethical discourses that address environmentalism, climate change, and the Anthropocene’s status as a sixth major extinction event. For the latter discourses, scale often refers to something “bigger” than we have ever previously encountered: climate change, for instance, as a crisis unprecedented in its scope and in the reorientation, or “reinvention,” of critical protocols that it is said to require. Given the unrelenting scale of such issues as climate change and of factors contributing to it, e.g., the shift from small-scale family farming to massive global-marketing industrial operations, must theory, too, as some suggest, undergo a transition from local and individual to global perspectives? In what might a global imaginary consist, and how might it relate to existing critiques of globalization as but a label for the hegemony of Western culture? Are broader understandings of scale available from within the ecological sciences and, if so, how might these serve as resources for the “greening of theory”?